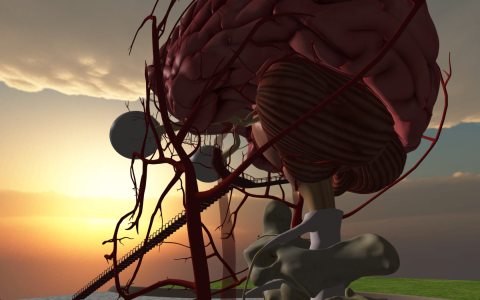 Back row, from left: Trevor Day, associate professor of physiology at Mount Royal University and leader, singer and rhythm guitar player for the Free Radicals band; Douglas Yuen and Justin Kelly, master’s students in computer science; and Dylan Dobbyn, undergraduate student in bioinformatics. Seated: Christian Jacob, professor in the Department of Computer Science at the University of Calgary; Jay Ingram (on Facetime); and Tatiana Karaman, master’s student in the Computational Media Design program. Photo by Riley Brandt, University of Calgary

In collaboration with science communicator and TV host Jay Ingram, the LINDSAY Virtual Human team has created a 3-dimensional, highly illustrative model of the human brain. In the 1970s, this idea was put forward by neurosurgeon Joseph Bogen, who proposed to build a neuroscience museum as a giant walkable brain. The Giant Walkthrough Brain has been presented as a live stage performance at the Banff Centre’s Margaret Greenham Theatre, with Jay Ingram as the fantastic story teller and The Free Radicals band presenting original music through a tour of fascinating findings, facts, and science (with some fiction) around the function and structure of the human brain.

Dr. Christian Jacob has been leading a team of four students — Tatiana Karaman, Douglas Yuen, Dylan Dobbyn, and Justin Kelly — in the Department of Computer Science at the University of Calgary, who made it their summer project to construct an incredible journey through a 3-dimensional, artistically rendered model of the human brain, enhanced by walkways, tunnels, info displays, and other features to create a true walkthrough experience.

The Giant Walkthrough Brain project is financially supported by the Hotchkiss Brain Institute, the Department of Computer Science, and the Natural Sciences and Engineering Research Council of Canada (NSERC).